“We have our data. It’s open. We teach you how to use it, so in times of danger, you know what to do. But the problem is the Filipino’s willingness to learn about disaster risk. There are 10.2 million tweets on Aldub, but there are less than a hundred thousand downloads of the NOAH mobile app.” – Dr. Mahar Lagmay

Yesterday, I was lucky enough to be part of the third out of the four DRRM workshops held by Project NOAH to teach the mass public how to use the NOAH websites and tools for DRRM. It brought together disaster risk reduction practitioners from both the government and development organisations at UP-NIGS, and you can still catch the last one on the 5th of October, 2015. Check out the NOAH blog or contact their staff at info@noah.dost.gov.ph for more information.

This isn’t going to be a how-to entry, since Project NOAH’s blog covers that in detail. What I’m writing about is the usefulness of the tools and data provided by NOAH, which can be helpful not only to planners but to everyone else, especially when anticipating hazardous events. There were also lessons that hit home during the workshop, and I just find that these points are worth reflecting on.

There are two websites used: the old Project NOAH website, and the beta version. The difference between the two is that the old one gives you the basic data provided by the sensors and systems, such as the weather outlook, rainfall, temperature, humidity, and pressure. The beta version, on the other hand, gives you the data on hazards. Let’s look at the two of them closely, and how we can use them.

The original site can show the user different types of data within different locations in the Philippines. These data can be loaded on the base map through simply clicking layers. In layman’s terms: 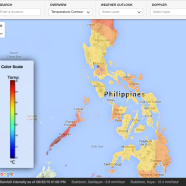 Simulated flooded areas have color-coded measurements. The icon of Filipino boxing world champ Manny Pacquiao was used to standardise the flood levels, as seen below:

The icon was used because of Manny’s height, 5’6″ or 167 cm., the average male Filipino height. The flood level legend easily translates and visualises the height of floods into low (knee-high), medium (waist to neck high) and high (above the neck). Flood simulations can be as specific as a 100 sqm. scale per pixel, which gives users very detailed boundaries of areas that have possible flooding. Flood return rates for 5, 25, and 100 years are possible to simulate. In layman’s terms, a 100-year return rate is the amount of rain simulated has a 1% chance of occurring in any given year in the specified time period. Flood reports can also be sent by users to validate flood simulations. The beta site can show all flood reports starting 2009.

Storm surge advisories (SSAs) can show users how a storm can penetrate or inundate into the country’s land forms. Basically this simulation is interpreted as the relationship between the strength of a storm and the corresponding level of flood that can be experienced. Storm surges can show the topography of the location by its flood simulation because flooded areas are most likely the low-lying part of the land form.

Landslide layers can show possible landslides, unstable slopes, and alluvial fan hazards. This is very useful in determining building zones. The beta website even provides classification on whether or not people can build in specific areas, stay away, or build with proper mitigation, precaution, and constant monitoring of the site. This layer is extremely useful in land use planning of local governments and private developers.

There are four mobile applications by NOAH, and these cater to specific needs of users. 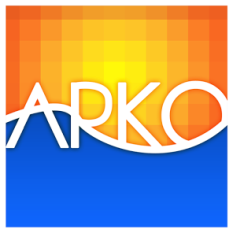 The NOAH app is similar to the original website. Arko is the mobile app for the beta version, so it shows the hazards. RaincheckPH only gives weather forecasts, and caters to those who are concerned only on whether they want to see the upcoming rains. Lastly, Flood Patrol can be used to report a flood in a specific area. All applications are available on Android, while the the first three are available on IOS. I use the NOAH app, and it is surprisingly faster than how Google Maps loads.

Websafe is an innovation of the InaSAFE software, a QGIS plug-in developed by Indonesia. It is available in the Beta website of NOAH, and can instantly calculate statistics of disaster impact for assessment.

The reports generated by Websafe are platforms for disaster response for any local government and development organization. The statistics can also serve as a basis for planners and disaster workers to strategically plan out the phases of recovery and corresponding actions per phase.

All data in the NOAH websites and tools are openly sourced, real-time and available to the public, while the mobile applications bring convenience to the average user. The website features many other tools for researchers, among them time stamps and a readily-available citation list.

The biggest limitation to using NOAH tools is that all of them are heavily dependent on the internet.  The extremely slow and expensive internet connections in the Philippines cause technical difficulties and are a hindrance to using real-time data.

Good knowledge on Philippine geography, especially political delineations, is also needed to use NOAH. The tools require users to select specific jurisdictions. For example, the flood maps should be narrowed down from region to district to cities or municipalities. This can be a limitation to many people, but then again, geography is something we were all taught in our elementary days, and appreciation and knowledge about your own country is something that should come out in your being Filipino. Simply, this is something I expect people to study by themselves.

Another limitation is that the Websafe tool is sourced from available datasets, which may sometimes not be updated. For example, the tool currently uses the 2010 NSO census and combined the demographic data with 2015 hazard maps, which may yield faulty results. However, since the tool is a work in progress, this has already been addressed by partnering with various sources such as the World Bank, UNICEF, and the National Anti-Poverty Commission, among others, who can provide more updated data sets to improve data accuracy.

Accuracy was addressed in the workshop. Dr. Mahar Lagmay, Executive Director of Project NOAH, admitted that “NOAH isn’t perfect, but it gives you an idea of what is happening, and what can happen.” And that is very important when we’re anticipating a 250kph typhoon in the next few hours. We’d know where to go using the maps, we would know what to do instead of being helpless in the face of disasters.

That brings me to the last part of my title, and the quote I inserted before the article. Human behaviour. Filipinos’ behaviour, in fact. Dr. Lagmay brutally hit millions by pointing out that they would rather use their time on media’s temporary and purposively hyped entertainment than learn about the things that could save their lives. But that blow is needed. It hit home. Not because I Tweet about romances (I’m not even sure if it really is a romance, and I haven’t started to use Twitter yet), but because it had an impactful point. There I was, a planner interested in DRRM, perfectly aware of the existence of the NOAH project, but I had scarcely thought of using the available tools because I depended too much on radio and TV announcements on weather forecasts.  Attending the seminar was a good step, and my learnings are something that should be shared, because educating more people is the next step to improving DRRM in the Philippines. I’m hoping that with more people aware of the NOAH tools, I would see more hashtags related to disaster preparedness and vigilance. I’m also hoping that we would start to complain less on being victims in future hazardous events. Wouldn’t it be relieving to not hear any news reports on deaths and destruction caused by disasters? The media would have to delve into other issues to make up for the screen time. Or they could start featuring no-death hazard events and best practices instead of only featuring all the negative aspects. But that’s another story to tell.

2 comments on “Pushing DRRM forward in the Philippines: Project NOAH’s open data, real time use, and a look on human behaviour”