I recently had the privilege to attend a green bloggers meet-up that was hosted by the Department of Environment and Natural Resources. I’ll be sharing overviews of the presentations during the event, and, as always, link the importance to environmental planning.

The Blog Talk was held in celebration of biodiversity and wildlife protection and aimed to engage bloggers to further the campaign for environmental protection. It covered a range of topics: The Philippine commitment to the COP21 or the United Nations Climate Change Conference, the Stop Illegal Wildlife Trade Campaign, and progress updates on the Clean Air Act, the Clean Water Act, and the Ecological Solid Waste Management Act. The event also featured two environmental champions in the Philippines: veteran journalist Howie Severino, who shared tips on how to approach environmental storytelling, and award-winning singer-songwriter and activist Noel Cabangon, who serenaded the group with his music on climate change and disaster recovery.

We all know it’s called COP21 and it was held in Paris, and it’s about renewing commitments to climate change. But first let’s put some context before discussing the current situation.

The first big response to the effects of climate change was in 1992 during the Earth Summit (also called the Rio Conference), where countries around the world tackled issues on environmental sustainability. The UN Framework for Climate Change was introduced. The action agenda, called Agenda 21, was released the following year. 5 years after the Earth Summit, in 1997, the Kyoto Protocol (or Rio+5) was held to reduce greenhouse gases and acknowledged global warming and anthropogenic activities as its cause. It also appraised the status of the Agenda 21, found the uneven progress among different countries and identified the trend on globalization.

In 2002, the World Summit (Rio+10) was held in Johannesburg, South Africa. It affirmed the UN commitment to fully implement Agenda 21, and this was when we had the Millennium Development Goals. In 2012, the Earth Summit 2012 (Rio+20) was held to reconcile economic and environmental goals of the global community. It formulated the Sustainable Development Goals and released the document The Future We Want.

Now we’ve arrived at COP21. COP stands for Conference of the Parties. COPs have been held every year since 1992’s Earth Summit, where member states of the treaty convene to review the Convention’s implementation and make further decisions.

What’s new in COP21 is that member states have agreed to keep global warming temperature below 2°C. Click here to see a video and learn more on why 2°C is the “magic number” and what its implications are.

COP21 and the Philippines

The Philippines is one of the 177 countries that signed the Paris Agreement. Our full statement “enshrined climate justice in an internationally legally binding agreement.” We also submitted our Intended Nationally Determined Contributions (INDC), which contains all our efforts so far, such as the Climate Change Act of 2009, the creation of the Climate Change Commission, the national plans, and means of implementation.

Here are two Powerpoint presentations from the DENR that summarize updates and progress of the Philippines:

This one was delivered during the blog meet-up:

I’ve always been soft-hearted for animals. In fact, I became an environmentalist immediately after that very first time I saw a polar bear drowning because of its melted ice cap home. So this portion of the post will take a lot of effort from me.

Biodiversity in the Philippines

The Philippines is blessed to be one of the most biodiverse countries but is also highly threatened when it comes to species conservation and protection, mostly because of our hotspots being exposed to anthropogenic activities. (Read it up.) Some of our richest biodiverse spots include Palawan and Puerto Galera. A key organization that delivers programs and projects for biodiversity is the Philippines Biodiversity Conservation Foundation.

The law that sees to the protection of our environmental resources is RA 9147 or the Wildlife Resources Conservation and Protection Act. Basically, the law looks at the activities that deal with wildlife and habitats–such as possession of wildlife, research, commercial breeding, and the like–and draws the limitations or provides the basis for illegality of these actions. The DENR-Biodiversity Management Bureau spearheads the initiatives for all of this.

This is a comprehensive and very visual presentation on biodiversity from the blog meet-up:

A focus of the DENR during the Environment Month is illegal wildlife trade. This is a worldwide problem where people illegally capture wildlife animals so they can sell the valuable parts, such as the ivory tusk of elephants, the coats of tigers, zebras, and other animals, and the like. In the Philippines, it is a big and underground business. (Read a news article about it.) Locally, rare animals are favored as pets, so rare bird species or snakes are usually sold. This has been a recurring problem and has furthered endangerment of our fauna, some of which are endemic to the country.

The next three topics of discussion are under the jurisdiction of the DENR-Environmental Management Bureau: Clean Air, Clean Water, and Solid Waste Management. (Here’s an overview of the EMB’s mandate and functions. Also, here’s the breakdown of the DENR structure, per Executive Order No. 192. Just for reference.)

More importantly, these three fall under the environmental law principle of Polluter Pays. The Guardian gives a brief of what the principle is about.

The Clean Air Act covers a number of topics: Airsheds, air quality management, permits for activities that may worsen the state of airsheds, emission limits (these are very scientifically technical), and corresponding penalties.

The following presentation by the EMB shows the updates of clean air management in the Philippines. It shows how much of the pollutants come from Metro Manila, and provides details on the TSPs (total suspended particulates). In summary, the TSP is gradually reduced, but to quote a news title in 2011 for the situation, “Air quality better but still bad.”

Clean Air Asia – Philippines promotes air quality management and provides a platform for networks among multi-sectoral organizations in the country. Here is a report they presented on airshed management in the Philippines.

If clean air is to airsheds, clean water is to watersheds, which may fall under the WQMAs or water quality management areas, per the Clean Water Act. (Read up on how WQMAs are designated. Framework on page 4.) Aside from these areas, the law also looks into septage and sewerage planning and management, prohibited acts, such as dumping or disposal and injecting pollutive substances into the water, among others, permits, and sanctions.

To date, we have 21 WQMAs, the last designated one being the Calao-Delinquente-Diadi River System (as of January 2016). 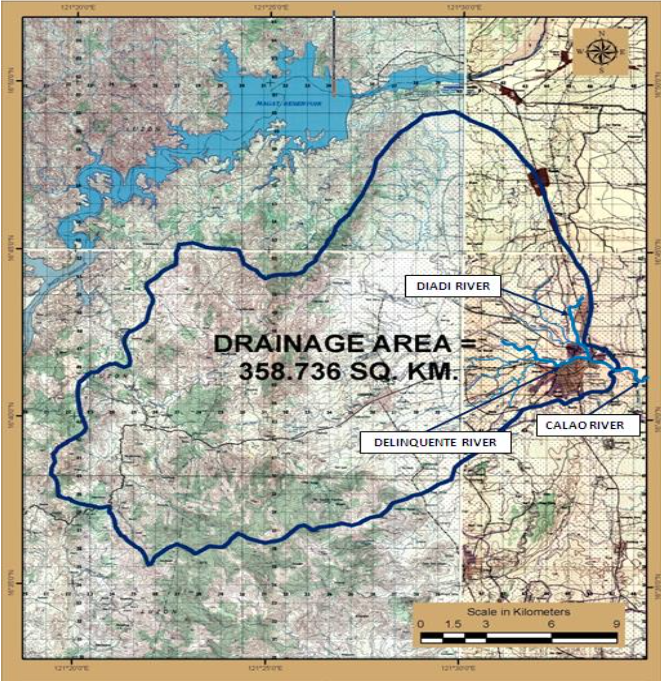 Whenever I look at delineated watersheds, I get reminded how planners should always work beyond administrative, political boundaries. Source: http://119.92.161.2/embgovph/Portals/24/WQMA%20DAOs/Calao-Diadi-Deliquente%20RS%20WQMA%20Scanned%20Doc.pdf

The law highlights not only national but local planning of solid waste management. Local levels, including cities, municipalities, and barangays now plan and implement strategies on locating materials recovery facilities (MRFs), recycling programs, trash collection, and the like.  Another major contribution of this law is that it prohibited the use of non-environment friendly packaging of products, shifting a plastic-oriented Philippines to a paper- and brown bag-friendly country.

While we’re at it, I’m sharing about this amazing town of Kamikatsu in Japan, where the residents have zero waste. Here’s the video:

And here’s a project on recycling which I hope to localize as a social enterprise someday: Precious Plastic.

Here are three papers that were included in the meet-up kit that DENR provided. These provide backgrounders and updates on clean air, clean water, and solid waste management.

Biodiversity, clean water, clean air, and solid waste management all play roles in land use and comprehensive development planning. Picking up from the earlier paragraphs, here’s how these environmental efforts are integrated in planning:

Let’s go to a lighter part of the meet-up:

Seeing Howie Severino in person got the fangirl in me bursting, but I’ll put that aside because what he shared to the group about covering environmental stories was very memorable and important to bloggers and journalists, and that’s what we should take home.

Blogging is first and foremost storytelling, and it’s about “making the important interesting and relevant.” Howie shared how stories may be repeated too many times, but can always be approached by different fresh angles. He demonstrated this through pictures of Mount Mayon from different locations, and with different perspectives and elements.

The tips on making a richer story of the Mayon Volcano:

He also made us appreciate how staring at one thing long enough shows you something. In this picture, he asked us, “What do you see?”

To which we all responded differently, saying that the middle island was a snail, turtle, or dinosaur.

He also said to look for new, surprising things. Such as this unusual haircut you wouldn’t expect to see everyday.

Any story has a character. The coal mining per se has been covered so many times, and will be boring, dark, and negative if presented just as such. But telling the story from the point of view of a coal miner, who is also a working student and is trying to uplift his life, makes the story human and so much more interesting. Here’s how the documentary turned out.

Other important reminders to bloggers and answers to blogging issues include:

It was such a great pleasure to hear Noel Cabangon sing three of his songs: Umuulan sa Tag-Araw, Umaaraw sa Tag-Ulan (the title is an irony, meaning that it rains during the summer season and it’s sunny and hot during the rainy season), which is all about climate change and its effects; After the Deluge, which he wrote after Supertyphoon Yolanda devastated the Philippines; and his classic song Kanlungan, which every Filipino knows by heart.

I wasn’t able to take a video of the first song (shame, because it was simply wonderful performed live), but I got the last two. Anyhow, here’s Umuulan sa Tag-Araw as uploaded by Greenpeace Philippines:

And here’s the video I took (After the Deluge / Kanlungan).

It’s the nth time I’ve listened to Noel Cabangon sing live, and he still just gives me the chills.

My commemorative photos with Howie and Noel, for the record. 🙂 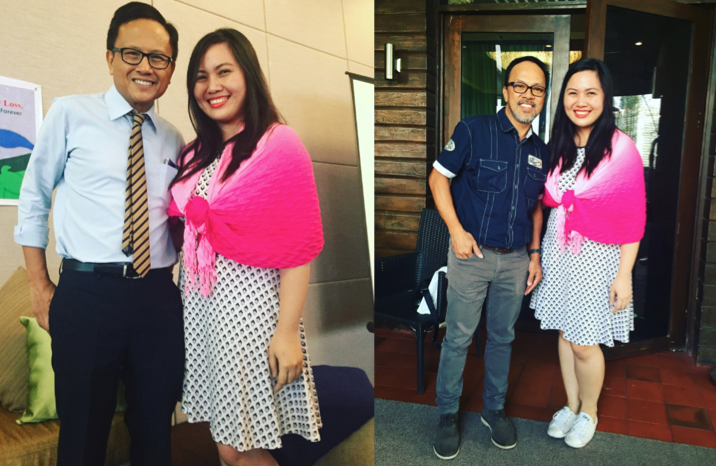 Lastly, here’s the family photo of the event. Congratulations and thanks to the DENR for putting this together. I learned so much from the speakers and from other blogger participants. The Environment Month (this June 2016) has a long list of activities in Luzon, Visayas and Mindanao, and I encourage everyone to take part in it. Here’s the schedule.

I hope sharing all this was useful and informative to you. Let me know what you think.