Public spaces have been both a love and an irk in my advocacy for improving Philippine urban spaces. A love, because it embodies equity, distributive justice, and shared rights, and an irk, because many Filipinos disrespect the notion of what “public” means, and just about everything it embodies–because of a sense of entitlement–while so many areas in the rest of the world put public spaces on a pedestal. So this post is going to be a listing of how public spaces are mentioned in our Philippine laws, what the New Urban Agenda says about them, and how I think we should move forward on improving our spaces.

What does ‘public’ mean?

Basically, public means that it can be used by everyone, and shared by everyone. The 1987 Constitution states that:

The Civil Code of the Philippines (RA 386, Art. 420) tells us that two properties are of public dominion:

When we say “public spaces,” what spaces are included?

There are quite a number of spaces that we can publicly use. These include streets (including areas for vehicular traffic, cycling lanes, and pedestrian lanes or crosswalks), sidewalks and pavements, bridges, open spaces such as parks (including green parks, pocket parks, national parks, and protected parks) plazas, and playgrounds, public infrastructure (such as hospitals, schools, community centres, and places of worship), public transport stations (including train stations, waiting sheds, passenger waiting areas), ports, other public works and buildings, and water bodies.

Streets are defined as “any thoroughfare or public space which has been dedicated or deeded to the public for public use,” according to the National Building Code (RA 6541, Annex: Definition of Terms). Parks and playgrounds are listed as basic needs of human settlements, as per Batas Pambansa 220 (Rule III, Section 5B).

When we say “public space,” we pertain to the use of the space, as it’s shared by everyone. When we say “open space,” it refers to “an area reserved exclusively for parks, playgrounds, recreational uses, schools, roads, places of worship, hospitals, health centers, barangay centers and other similar facilities and amenities,” according to Presidential Decree 1216.

Outside Philippine law, and referring to the US Environmental Protection Agency (EPA), we can define open space as “any open piece of land that is undeveloped (has no buildings or other built structures) and is accessible to the public.” It can include green spaces, which are defined as “land that is partly or completely covered with grass, trees, shrubs, or other vegetation.”

The UN HABITAT defines ‘public open spaces’ as “the sum of the areas of the built-up areas of cities devoted to streets and boulevards–including walkways, sidewalks, and bicycle lanes–and the areas devoted to public parks, squares, recreational green areas, public playgrounds and open areas of public facilities.” Under SDG 11 (make cities and human settlements inclusive, safe, resilient, and sustainable), the indicator to measure progress is “the average share of the built-up areas of cities in open space in public ownership and use.”

What are the ideal public spaces?

Statement 37 of the New Urban Agenda provides for a very good description of how our public spaces should be: We commit ourselves to promoting safe, inclusive, accessible, green and quality public spaces, including streets, sidewalks and cycling lanes, squares, waterfront areas, gardens and parks, that are multifunctional areas for social interaction and inclusion, human health and well-being, economic exchange and cultural expression and dialogue among a wide diversity of people and cultures, and that are designed and managed to ensure human development and build peaceful, inclusive and participatory societies, as well as to promote living together, connectivity and social inclusion.

How much open space is required in our settlement areas?

Subdivisions and developments with at least one hectare (and up) should have at least 30% open space, according to PD 1216 Section 31. In this 30%, standards for parks, playgrounds, and areas for recreational use are also specified. These reserved public lands are to be non-alienable (cannot be bought or given titles) and non-buildable.

The same section of PD1216 also provides for adequate roads, alleys, and sidewalks, and specifies that subdivision project should have tree planting on designated areas.

What public spaces should we have in the Philippines?

Section 17 of the Local Government Code (RA 7160) requires our local governments to provide basic services and facilities, where public spaces are enumerated. As such: 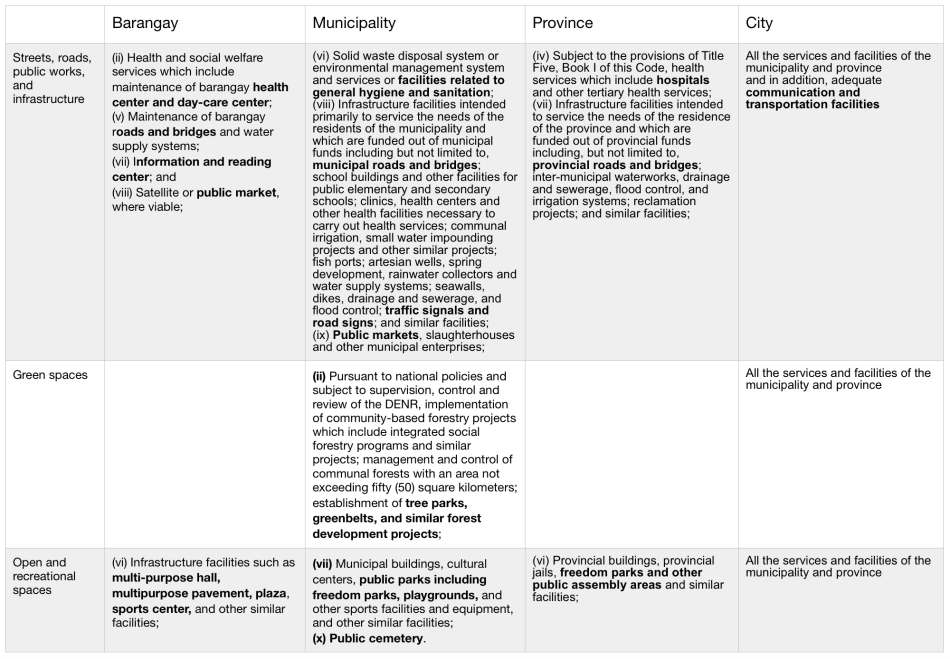 What about national parks and natural parks–are they public spaces?

Yes, they are public spaces. However, laws such as the National Integrated Protected Areas System (NIPAS) Act (RA 7586) and the Tourism Act of 2009 (RA 9593) (which repealed EO 30) provide for entities that regulate the activities and ensure the maintenance of the parks.

For example, the Intramuros Administration, National Parks Development Committee (which accounts for Luneta, Paco Park, Burnham Park, and Pook ni Maria Makiling), and Nayong Pilipino are all under the Department of Tourism.

Protected areas, which include natural parks, are under the NIPAS. The system  is lodged under the Department of Environment and Natural Resources. Records on boundaries, rules and regulations, and other legal documents pertaining to the areas are supposed to be made public and available.

And what about water bodies?

Water bodies are owned by the state, and yes, they are also public spaces. The Local Government Code (RA 7160) section 131 defines ‘municipal waters,’ as such:

“…includes not only streams, lakes, and tidal waters within the municipality, not being the subject of private ownership and not comprised within the national parks, public forest, timber lands, forest reserves or fishery reserves, but also marine waters included between two lines drawn perpendicularly to the general coastline from points where the boundary lines of the municipality or city touch the sea at low tide and a third line parallel with the general coastline and fifteen (15) kilometers from it. Where two (2) municipalities are so situated on the opposite shores that there is less than fifteen (15) kilometers of marine waters between them, the third line shall be equally distant from opposite shores of their respective municipalities.”

This technically tells us that the waters on coastal areas, including water easement, and even with private resort fronts, can be enjoyed by everyone.  Technically this also tells us that island waters, and islands themselves (because of the easement), cannot be owned.

Who are responsible for our public spaces?

It’s a shared responsibility between you, me, and practically everybody.

When it comes to urban design, it’s a shared responsibility between landscape architects and urban planners or designers. Design plays such a great role in our public spaces, not only because of aesthetic, but because of how it can help direct people’s behaviour, and because of how it provides for functionality.

When it comes to maintenance and management, it comes down to us as a citizenry, and our government at the national and local levels, to represent the state.

The New Urban Agenda envisages cities that are participatory, that promote civic engagement, and that engender a sense of belonging and ownership. Can we say that our public spaces in the Philippines are inclusive?

They should be. We still do not have clear participatory and inclusive methods on how to engage different demographic segments on developing public spaces, but there are provisions for being sensitive to vulnerable groups in some of our laws:

The Philippine Clean Air Act , or Republic Act 8749, also provides for healthier, pollution-free public spaces that are implemented by LGUs, as stated in Article 5, Section 24: “Smoking inside a public building or an enclosed public place including public vehicles and other means of transport or in any enclosed area outside of one’s private residence, private place of work or any duly designated smoking area is hereby prohibited.”

We’ve got a problem in the Philippines–so much of our public spaces can be dangerous, not cared for, and inconvenient for public use. What can we do about it?

There are quite a lot of things we can–and should do:

1. Respect the space, keep what’s public for everyone. Very sad problems in the country include encroachment and the use of streets as a private parking space.

While technically street parking can be allowed by whoever has the jurisdiction of the space (for example, the local government), the usability of the space should not be restricted for others, so citizens can always bring up if the practice already causes traffic or difficulty.

While the informal economy greatly contributes to progress, and while I do not always agree with relocating slum dwellers because of social issues, we can learn to let go of entitlement in claiming public spaces for our own exclusive use. This doesn’t just go for parking on streets, it goes for drivers who scoff at pedestrians and cyclists, who have every right to use the streets and roads. It will make a difference in our cities.

2. Account for the public spaces, and demand it from our government. How many parks, and open, green spaces do we have access to? Are all the public spaces stated in the Local Government Code present in our localities? Are our spaces inclusive and friendly towards the elderly and disabled, safe for children, and promotive of equality and respect for women’s needs?

I personally look for these characteristics when I observe public spaces:

In all honesty, I would actually go paint crosswalks, create plant-based buffer zones on unsafe streets and spaces, and leave movable chairs on pavements if I had my way. But let’s get some issues straight. When we say public space, it’s free for public use, which is different from the word alter. Since public space is technically shared by everyone, one’s point of view on how to improve it wouldn’t really be shared by everyone, and might not be the best interest of the people.

So, if, as a concerned citizen, I wanted to alter public spaces that needed improvement, could I do it? Legally, technically, we would have to take it up with whoever has jurisdiction over the space. For example, if we eyed a Barangay road, then we talk to the Barangay about it. If it’s a city road, then we go ask the city government. I’ll have to conduct further research if there are local governments that have processes on how to improve these spaces together with communities and citizens.

And what if we received negative responses to this request? Technically you would have to appeal or have another dialogue, and in more extreme cases, rally to exercise citizen power, or take it up with DILG (or the Ombudsman if it were an administrative case). Sadly bureaucratic, I know.

This case has also been present in cities around the world, and responsible, pro-active citizens have responded with what we call placemaking. There is already a wide literature coverage on the movement, along with what we read on rebel cities, tactical urbanism, and guerrilla urbanism. These have resulted to place-led public spaces, championed and used by citizens.

4. Lastly, learn about the legal bases of our public spaces. I compiled provisions from Philippine laws and the recommendations from the New Urban Agenda of Habitat III, held in Quito, seen below. Happy reading!

Comment below if you’d like to clarify on some other spaces which I missed out, and I’ll be happy to do research and ask for legal consultation and add it to this post. 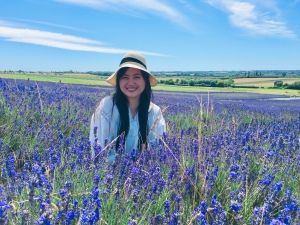